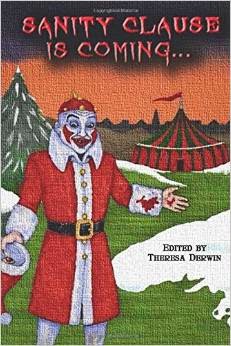 "Christmas is a terrible time for turkeys," as my Dad likes to sing throughout the preparation of Christmas dinner. I do wonder sometimes whether it might be worth finding the rest of the words for him.

But Christmas can be a terrible time for others too...

Don't worry, this post isn't going to urge you to spare a thought this Christmas for abandoned puppies or the residents of Albert Square. This is... noble. Yes, I'm plugging a book.

Ain't No Sanity Clause was published by Fringeworks in late 2012, an anthology of festive frightfulness, wherein all manner of maniacs and monsters managed to murder and mutilate their way through a winter wonderland.

And now, a sequel is here. Sanity Clause is Coming continues the Christmas horror theme with a second dose of Yuletide strangeness. Full of stories that are sometimes gruesome, sometimes hilarious, and often both at once, this new collection delves beneath the baubles to the darkness that lurks within.

If you're the sort of person who spends Christmas Day's fifteen episodes of Eastenders grinding your teeth through the subplot about the comedy characters trying to blag a free turkey dinner, and longing for the bit when this year's expendable cast member finally collapses in the snow outside the Queen Vic, Sanity Clause is Coming might be for you.

My own contribution was submitted for the first volume under the title Full Pastry Jacket (for reasons which I can't even pretend to remember). It appears here retitled as Pantocrime. Strange things are afoot at the dress rehearsal for this year's am dram panto...

As chance would have it, publication of Sanity Clause is Coming coincides with me directing my very first am dram pantomime. I do hope my cast have a chance to read the story. Something tells me they'll be very keen to learn their lines afterwards...

Sanity Clause is Coming is available now in paperback from Amazon.
Posted by Andrew Lawston at 07:22