Casanova: The Story Of My Escape. Get It While It's Cheap! 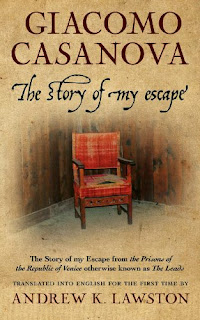 The Story Of My Escape is my most popular and enduring book to date. Casanova (yes, that Casanova) is partying in Venice, when the Inquisition lock him up in The Leads, a notorious prison in the lead-lined roof of the Doge's Palace on St Mark's Square. After 15 months of vermin, illness, boredom, fear, and insanity brought on by reading a bad book, the libertine attempts the most audacious and flamboyant escape in history.

If everything you think you know about Casanova comes from a certain TV serial starring David Tennant then, yes, the book covers the bit when Casanova was locked in prison for five minutes before hearing some bad news about his girlfriend and punching his way out through the wall. The full story is... somewhat more convincing (but still not necessarily entirely true).

It's a brilliant book, a truly marvellous book, and I was staggered to discover it had never been made widely available in English before. At the suggestion of Kate Orman, I translated it from French myself (though Italian, Casanova tended to write in French in order to reach a bigger audience. I surmise from this that he would only have approved of my attempt to render his tale in English).

In the two years that the book has been available, it's sold several hundred copies all around the world, in e-book and paperback. If my interest was purely commercial, I'd be a fairly satisfied self-published author with a modest success in my catalogue.

But I have delusions of scholarship, and I feel this is an important book. The moment I began receiving emails from people thanking me for finally publishing a text for which they'd been searching for years, and from people who letting me know how much they'd enjoyed reading it after completing the Secret Tour of the Doge's Palace and seeing Casanova's actual cells (a trip I've still not made myself!), I knew this book needed to get out of the self-publishing ghetto and in front of as many readers as possible.

People need to read this book, to discover what a witty, ruthless, brilliant man Casanova could be, to be entertained by his philosophical reflections, which can switch from thoughts on bravery and honour to urine within a couple of paragraphs, and back again. In the course of this book, Casanova is as broken as anyone can be by both mental and physical illness, but still bounces back to leave a snotty note for his jailers before breaking out of his cell. The French edition was a huge bestseller across Europe in the late 18th Century. It's been a long time reaching the English market, but now it's here I want people to read it.

To that end, the e-book is currently on sale at just £0.99 / $0.99 on Amazon, until Tuesday 16 February, and is being heavily promoted around the interwebs. Enjoy The Story Of My Escape.
Posted by Andrew Lawston at 07:50