Today, the UK has been remembering Noor Inayat Khan, a British Muslim who was the first female radio operator sent into Nazi-occupied France. English Heritage have erected one of their iconic blue plaques at the flat where she lived in Bloomsbury from 1942-43, and they've put together detailed information on her life and heroic exploits which you can read here.

I was struck by the detail that prior to the Second World War, Noor had been pursuing a career as a children's writer in Paris, with some stories in Le Figaro. I made a quick search of France's National Library archives, and I found one quite quickly. I've translated this below. I have done this quickly, but I hope I've done it justice. It's a rather charming retelling of Echo and Narcissus.

I hope you like this, I've done it because... I don't know. Noor Inayat Khan lived a remarkable life, that was brutally curtailed. And she was heroic and brave (rooftop escapes are my Kryptonite), but she was also creative and inspired. And although today is about remembering - and, for many, probably hearing for the first time about - her heroic wartime acts, I'd like everyone to remember that she was so much more than a war hero. 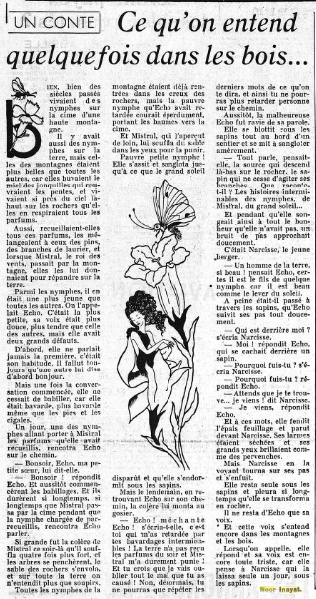 What you hear in the woods sometimes...

Many, many years ago there lived some nymphs at the top of a high mountain.

There were also nymphs down on the ground, but those from the mountains were more beautiful than all the others, because they drank the nectar from the daffodils which covered the slopes, and lived so close to the sky, up there on the rocks, that they breathed all its scents.

So, they gathered all those scents, mixed them with pine, and laurel branches, and when Mistral, King of the Winds, passed by the mountain, they gave them to him to spread over the earth.

Among the nymphs, there was one who was younger than all the others. She was called Echo. She was the smallest, her voice was softer, more gentle than the others, but she had two great drawbacks.

She was never first to speak, that was her habit. Someone else would always have to say hello to her first.

But once conversation began, she didn’t stop babbling, because she was chatty, even chattier than the magpies and the crickets.

One day, one of the nymphs was going to take the scents that she had gathered to Mistral, when she met Echo on her way.

“Good evening, Echo, my little sister,” she greeted her.

“Good evening!” Echo answered. And immediately began babbling. And it took such a long time, so long that Mistral passed over the summit while the nymph charged with gathering, listened to Echo speak.

So great was Mistral’s rage that evening that he blew four times harder, and trees leaned over, sand was blasted from rocks, and across the world there could be heard nothing but sighs.

All the mountain nymphs had already climbed into crevices in the rocks, but the poor nymph whom Echo had delayed was running hopelessly, carrying the balms towards the peak.

And Mistral, who saw her from far away, blew sand into her eyes to punish her.

Poor little nymph! She was sitting and sobbing until daylight failed and she slept beneath the pine trees.

But the next day, on finding Echo in her way once more, rage took hold of her.

“Echo! Wicked Echo!” she cried. “It was you who delayed me with your interminable chattering! The earth hasn’t received its evening fragrance and Mistral has punished me sorely! And you think that I’m going to forget all the harm that you’ve done! No, henceforth, you’ll only be able to repeat the last words spoken to you, and that way you’ll never again be able to delay anyone on their business.”

At once, the unfortunate Echo was robbed of her speech.

She huddled under the pine trees beside a path, and began to sob bitterly.

“Everything speaks,” she thought, “the stream flowing down there over the rocks, the pine tree which never stops rattling its branches. What’s it talking about? Interminable stories about nymphs, about Mistral, about daylight…”

And while she was thus reflecting on all the joy that she no longer had, the sound of soft footsteps was approaching.

It was Narcissus, the young shepherd.

“A man from the earth, so handsome!” Echo thought, certain he was the son of some nymph because he was as handsome as the dawn.

Hardly had he passed through the pine trees, when Echo began to follow his footsteps softly.

“Who’s behind me?” Narcissus cried.

“Me!” Echo answered, hiding behind a pine.

“Why are you hiding?” Narcissus cried.

“Why are you hiding?” Echo answered.

Wait till I find you… I’m coming!” Narcissus said.

And at those words, she split the thick foliage and appeared before Narcissus. Her tears had dried and her wide eyes shone like periwinkles.

But on seeing her, Narcissus turned on his heel and fled.

She stayed under the pines for a long time and wept for so long that she turned to stone.

Nothing is left of Echo but her voice.

And that voice can still be heard in the mountains and woods.

When you call, she answers and her voice is still so sad, because she’s thinking of Narcissus who left her alone one day, under the pines.

Noor Inayat
Boring bit. This translation was taken from Gallica, which archives many French newspapers and other publications. The full page can be seen here: https://gallica.bnf.fr/ark:/12148/bpt6k410313f/f7.item. This story was first published on Sunday 13 August 1939, and was written by Noor Inayat Khan. This translation however is copyright Andrew Lawston 2020, please do not share without attribution.
Posted by Andrew Lawston at 05:29